All Elements Of Hip-Hop #CheckIt

A street savvy album that explores Black love, brutality, capitalism’s grip on our daily thoughts, and the connection it all has to our ancestors. Lose your illusions and strip things down without losing any of the character.

The idea for this compilation came about because of my search for a rare psych/funk 7″ that isn’t even included here! My friend DJ Oneofakind played me the said record and I totally lost my mind. Some months later after a lot of asking around and searching online, a copy turned up on Discogs.com for a painful amount of money. I contacted the seller to ask a couple of questions and it turned out I was talking to Jake Holloway, BBE’s in-house designer. I’d loosely known Jake for a few years through mutual friends so we quickly arranged a time to meet and take care of business. Jake told me he’d offered the 7″ to a few other DJ/collector friends but they’d passed on it as it was ‘too heavy’ for them. This got us talking about my love for psych records with a funky slant and I explained my frustration at buying so many records that fit that description, that were ‘too heavy’ to play at my typical DJ gigs. Jake had the perfect solution: “why don’t you do a compilation of funky, fuzzed-out psych stuff for BBE?
Psych Out is released June 10th on Vinyl, CD and digital. 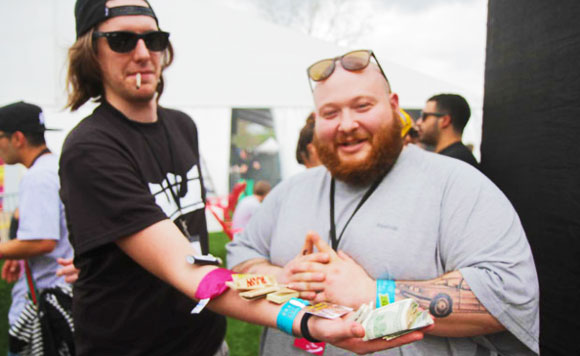 J-Love takes it back to The Outdoorsmen with this new Bam Bam track from J’s new Production Credits 2016 mixtape . J always has unreleased joints with the biggest names in Hip-Hop and this tape is no different . Featuring Wu , Rae , Ghost , G.Rap , Mobb Deep , Tragedy , Cormega , and more . DL for free below.

Lord Digga decided to jump in an interview and send a few shots at Shabaam . Never one to let that go unchecked , Shabaam let’s loose his fury from Brooklyn with French producer DJ Duke on production .

Quelle Chris puts the mic down for a second to bring you this Memorial Day BBQ remix project of some our favorite classic Hip-Hop joints of all time .

Official 247HH exclusive interview with New York based Hip Hop DJ’s Stretch & Bobbito, where you’ll hear about how their purpose was to stop show bootlegging and push out dope music , the meaning and significant sayings and words they used on the show , what they would say to the younger them, if they could , how they got a pass while dealing with Label Reps and Promoters in the Hip Hop game , funny WKCR moments with Ol’ Dirty Bastard and snapping on each other , being real fans of Hip Hop even before the show, as well as meeting dope MC’s in the game , and more

This will be available in limited run on cassette starting June 1st . Look for Bannon’s new project out later this year .

the last Academy Awards and the regular whitewashing of Hollywood roles, I wrote this song and made this video to add my piece to the conversation. If you have any experiences or stories about this issue join the discussion at https://www.facebook.com/dumbfoundead/